17jun20:30Manuel RivasMeeting: How to build a warlike conflict...20:30 Carpa central

How to build a warlike conflict. Geopolitics, international relations and military issues 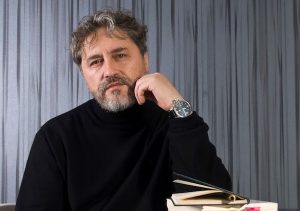 Manuel Rivas was born in A Coruña in 1957. He is a poet and a writer and also author of several scripts. His first work, when he was 15 years old, was as journalist trainee (“unpaid trainee” in El Ideal Gallego). He considers journalism to be a “branch of literature” and maybe it´s because of this that he titled one of this documentary anthologies in Spanish: El periodismo es un cuento. He is cofounder of clandestine poetic magazine Loia (1975), and his first poetic book was Libro do Entroido. A sample of his poetry is compiled in O pobo da noite (1997) and in A desaparición da neve (2009).

His most recent works are the tales volume:O máis estraño (2011), the novel O último día de Terranova , and in poetry A boca da terra. He is co-director of monthly magazine of new journalism, freedom and culture Luzes.