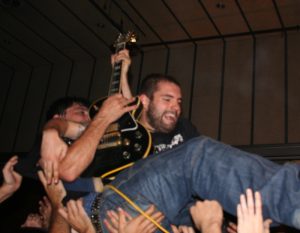 Founding member of one of the first groups that mixed traditional Galician music with urban rhythms such as Punk, Ska and Rock “n” roll: Los Verjalhudos (1988).

In 1993 he created the group El Jarbanzo Negro, a group that lived 11 years of touring promoting cultural exchange in an active way, both acting and participating in the organization of many festivals throughout Europe.

In 1996 The Black Jarbanzo joins the theater-circus company Kran (Switzerland) discovering the life and work of the performing arts shows, turning 3 years in circus wagons with his show “Persival”.

In 2000, they landed in the Popular Athenaeum of 9 Barris, an iconic squatting factory in the suburbs of Barcelona that became an international reference for their creative and social ideas, their struggle to favor a diverse and accessible culture for all and their Self-managed way of organizing a cultural equipment. The “Jarbanzos” establish their camp and for years actively participate as musicians and collaborators in the life of the cultural center.

In 2005 He joined the Ateneo’s work team by dynamising and organizing his cultural agenda. Here was born a festival that already has 5 editions: The party, social and cultural exchange between Galicia and Nou Barris. This year, the root of the Shanghai project and on the occasion of the 40th anniversary of the Athenaeum, we are preparing a new edition on October 6th, 7th and 8th. Stay tuned, Walk the Wheel !!!!

From 2010, trained as a son technician, he works as a technician at the Vallromanes Theater, the Koryland recording studio and the circus-theater company Ciclicus. He also retakes life in the stages in several groups and exerts that his band circonautas of musical director in three productions of the Cyclicus Company and of the circus festivals of Montgat, Hospitalet and Trapezi (Reus).

– Petitet, Rumba symphonic of him Raval, that will have its result the 17 of October when the orchestra rumbera of 25 musicians of the raval fuse that Orchestra symphonic of the Liceu Teatre in its mythical theater of the Rambla Barcelonesa.

– Shanghai Party of Nou Barris, between 60 and 100 people from Galicia we will ride on the Shanghai train reminding the many Galician immigrants who traveled this route and arriving in Barcelona full of hope, desire to meet and exchange experiences.

As a musician he is a regular contributor to the band Los Tres Trebons (of which he is an absolute) and is working on the new production of Ciclicus as a composer.
Traductor de Google para empresas:Google Translator ToolkitTraductor de sitios web